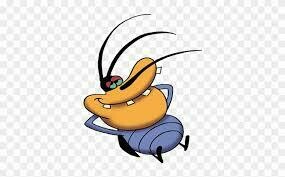 Dee Dee – Dee Dee is the ever-hungry cockroach and youngest of the three. He has a blue body, orange head and green eyes. His appetite sometimes reaches insane proportions, often resulting in the consumption of larger animals or other things that would otherwise be inedible (such as hyenas in one case and, due to the effects of a poisonous mushroom in another case, an insect. Other instances include the fish on the wallpaper "Oggy's Clone"," and a clownfish in "Scuba Diving"). He is known to like opera. Sometimes it is shown that his feet are so foul-smelling, the juice they produce is toxic and can melt objects, as shown in "Caught in a Trap". He is named after bassist Dee Dee Ramone.