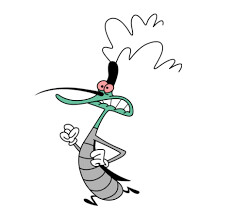 Marky – Marky is a suave heartbreaking, silvery-grey body, green head roach with pink eyes (originally red, but returned in the ending of the episode "Teleportation" where he is stuck in the ice cubes); he is the tallest and middle brother of the three roaches and often doesn't really care about what the two others are doing. While he originally used to love causing mischief just like his brothers, he has grown to be more laid-back in later episodes, though he still enjoys hanging out with Joey and Dee Dee and causing general mayhem like he has always done. His hobbies are dating puppets and reading books. He also has bad breath, as revealed in the season 1 and season 6 episode "It's A Small World". He is named after drummer Marky Ramone.