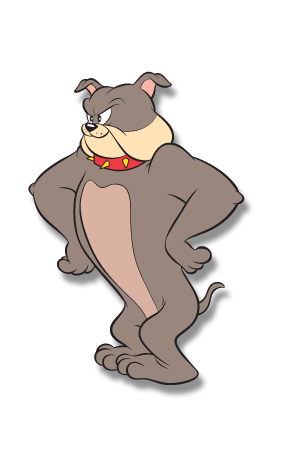 Spike Bulldog is a gray, rough bulldog that appears in many of Tom and Jerry cartoons. He has a somewhat minor friendship with Jerry and is a formidable enemy to Tom, though he is occasionally a rival to both protagonists, as he was in the episode Dog Trouble

Spike has a grudge against Tom, not just because he's a cat, but because whenever they cross paths, Tom is interrupting quality time with his son, Tyke because he's too busy chasing Jerry to watch where he's going. Obviously, whenever Spike tells Tom not to do a certain thing, Jerry overhears this and does his best to get Tom in trouble (in the example, Jerry would get Tyke as dirty as possible). Spike proceeds to beat Tom up thinking he was responsible for it. After Spike beats Tom, he is shown having a good time or resting peacefully with his son tyke and they are joined by Jerry their real saboteur, disturber, and culprit who was really the one that Spike should beat up. Spike also appeared in some of the recent cartoons featuring a basset hound called Droopy, another popular MGM cartoon character.

Spike (and his son, Tyke) is most likely a secondary or even major character, as he has appeared in almost all renditions of Tom and Jerry's cartoons.